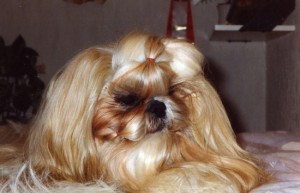 On January 7th 1986  a small shih tzu puppy was born that came to be known as Lina. This is the beginning of the tale of the little golden and white bitch who was incredibly sweet but in no way was the  one in the litter that was supposed to be a star….. This little “ugly” duckling developed into a beautiful lady who conquered most people’s hearts both inside and outside the show ring. It is of course from her I got the kennel name Art Made. Read more about Lina here.